OSCE, UN and EU leaders meet ahead of Geneva discussions on Georgia 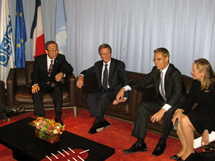 Javier Solana, the High Representative for the EU’s Common Foreign and Security Policy and , the European Commissioner for External Relations, and Antonio Guterres, the UN High Commissioner for Refugees also attended the working dinner and a news conference at which the following statement was made:

“The EU, the UN and the OSCE – all three engaged in a significant manner through their respective missions on the ground – will contribute fully to the Geneva discussions that will open tomorrow, 15 October, in the Palais des Nations.

The discussions are in line with the agreements of 12 August and 8 September 2008. They will address two important questions – stability and security in the region and the situation of displaced persons.”