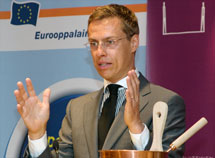 Foreign Minister Alexander Stubb underscored Finland’s full commitment to the EU Security and Defence Policy at the event organised under a theme ‘The Aftermath of the EU Summit’ by the Finnish Institute of International Affairs and the European Movement in Finland. By this, Stubb referred to the debate held in the EU summit last week, resulting in provision of so-called Lisbon guarantees to Ireland. The purpose of the guarantees is to assure Ireland that the Lisbon Treaty will not affect the country’s neutrality policy, taxation or abortion legislation. Therefore, in his address, Subb underlined that Finland does not want to belong among the countries that link the discussion about neutrality with the EU security guarantees.

Stubb wondered especially about the socialists’ efforts to gain themselves the presidency of the Parliament for the second half of the Parliamentary term in spite of the massive defeat they suffered in the elections. Accordingly, Stubb hoped that in future nominations the election results would be better taken into account and the nominations would be made using them as a basis. In addition, Stubb proposed that, in the future, Commissioner candidates could stand as candidates in the European Parliament elections; this would increase the interest towards the elections, legitimise the status of future Commissioners, and develop the EU in the direction of parliamentarism.