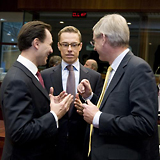 Foreign Minister Alexander Stubb’s opening address kicked off the broad discussion on Russia that took place at the General Affairs and External Relations Council in Brussels on 17 November. The Foreign Minister condensed the three main messages that the European Union should convey to Russia. First, Russia must modernise the country’s economy; second, the EU should support President Dmitry Medvedev’s reform policy; and third, Russia should be made to understand that its friends come from the West. On the whole the Foreign Minister was satisfied with the discussion on Russia.

The Foreign Minister’s press conference, however, was coloured by the appointments to the top EU posts at Thursday’s extra informal Summit of the Heads of State and Government – a topic that the whole of Brussels is talking about.

“Modernisation of the Russian economy is absolutely essential. The prediction for this year is that the economy will shrink by eight per cent. Russia is too dependent on income from raw materials; 50 per cent of the State’s income comes from the export of energy, oil and natural gas.” In this way Foreign Minister Stubb summed up the EU’s first message to Russia when addressing the Council in Brussels on the eve of the EU–Russia Summit. “Russia needs her own Nokia or, to be polite to the current Presidency, her own Sony-Ericsson,” the Foreign Minister said jokingly to Finnish foreign correspondents during his press conference.

Support for President Medvedev was the second message on the list of the Foreign Minister’s opening address to his ministerial colleagues. “President Medvedev’s recent speeches have been very positive.” According to Stubb, Medvedev’s reform policy would modernise the economy, strike a blow to corruption and improve human rights. “How the power game will be settled in the Russian leadership is another matter, but an international and liberal leader deserves full support,” Foreign Minister Stubb stated.

Third, Russia should be made to understand that “the country has friends, not enemies, in the West. International politics is no longer a zero-sum game.” The Foreign Minister emphasised that Russia should realise how necessary and fruitful it is to have good relations with close neighbours. On the whole, Stubb was very satisfied with the broad discussion that took place and praised the Presidency, Sweden, for drawing up an excellent summary of the discussion.

An issue closely linked with Russia and also in the fore was Ukraine, which is struggling with the triangle of an economic crisis, an internal political crisis and a natural gas crisis. “We must not forget Ukraine with its population of 45 million people,” the Foreign Minister said in summarising his points on Ukraine at the General Affairs and External Relations Council meeting.

The informal Summit on everyone’s lips

Appointments to the top EU posts at Thursday’s extra informal Summit of the Heads of State and Government of the European Union, however, stole the show at Foreign Minister Stubb’s press conference. “Everything is still completely open,” the Foreign Minister said about the present negotiations. Many factors influence the appointments, and the media and ministers alike are all engaged in speculation, Stubb said of the current situation. The Foreign Minister still considers it realistic that Finns could be named to the top posts, depending on the situation that is in a constant state of flux.

In any case, the appointments are extremely important, for the Union needs strong, competent people to lead its strengthening foreign policy. “In addition, it would be important for women to be appointed to these top posts. If this does not happen, we will not give the sort of picture of the EU that I myself would want to give”.

The foreign correspondents were also keenly interested in what would happen if agreement on the appointment package isn’t reached yet on Thursday. “I don’t see anything dramatic happening if the appointment process is prolonged. This has happened before, too,” the Foreign Minister pointed out, though he also said he remained hopeful that a solution could be worked out quickly.