Štefan Füle, the EU Commissioner for Enlargement and Neighbourhood Policy, visited Finland on 18 October at the invitation of Foreign Minister Alexander Stubb.

“We support the work Štefan Füle is doing. In my opinion, he has one of the most difficult and important jobs of all Commissioners.” 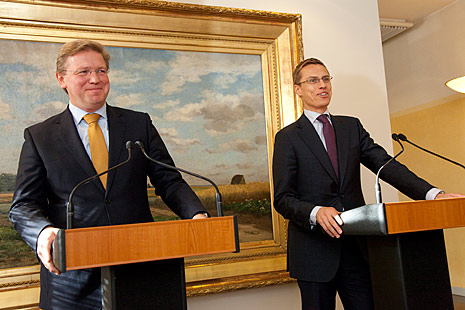 Foreign Minister Stubb said that Finland emphatically supports enlargement and is one of its exponents. “We believe that the enlargement policy is among the European Union’s finest policy programmes and is a key success factor for the Union.”

According to the foreign minister, the Union now has three simultaneous enlargement strategies. “The first is in Western Balkans, and we are awaiting the views on this to be announced by the Commission on the 9th of November. The second is the enlargement strategies pertaining to Serbia and Turkey. The third is the ‘easier enlargement case’ involving Iceland,” Stubb said.

According to Commissioner Füle, to be successful the enlargement process must rest on two pillars: strict conditionality and a base in balanced political steering.

Enlargement involves technical criteria that need to be met. The EU expects that a candidate country is one hundred per cent ready to fulfil the conditions. In enlargement, trust between the two parties and adherence to previous commitments should also be guaranteed. The rules may not be changed midstream.

Serbia’s road to the EU discussed by the Foreign Ministers

Enlargement of the European Union was also the topic of the meeting between Foreign Minister Stubb and Foreign Minister Vuk Jeremić of Serbia, who visited Finland on 18 October. “Finland is among the strong supporters of Serbia’s road to the EU,” Stubb stated at the two foreign ministers’ joint press conference. Serbia hopes that the country’s membership application will go to the Commission for an opinion already in October, and this is what Finland also wishes. According to Foreign Minister Stubb, this is symbolically a highly important step.

In its Resolution approved in September, the UN General Assembly urged Serbia and Kosovo to engage in dialogue. Foreign Minister Stubb thanked Serbia for the country’s cooperation on behalf of the Resolution and congratulated the country on this achievement. Stubb stated that it is now high time to start the talks, which in his view could begin for instance in Brussels. Foreign Minister Jeremić stated that Serbia is ready for dialogue and hopes for a prompt start. 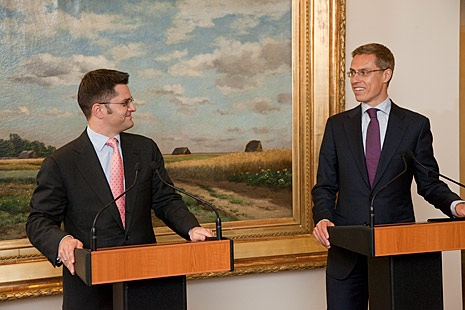 Foreign Ministers Jeremić and Stubb hope that Serbia’s membership application will go to the Commission for an opinion already in October. Photo: MFA/Eero Kuosmanen.